To say that Don Vappie has had a busy musical career would be an understatement.

Choosing to stay in his hometown, New Orleans, was the choice Don Vappie made in 1974. Immediately after filling in on a gig with the great Peggy Lee, she offered him the guitar chair. He politely declined. So, she wrote and gave him an open invitation signed on the hotel stationary, "if you ever want to play …” “Looking back, I think that was a defining moment in my life,” says Vappie. Though at the time, as he played in cover bands performing the popular music of that period, he evolved an interest in the rich history of music and tradition in Southeast Louisiana, particularly New Orleans.

Vappie was born into an extended family of musicians, some of whom are quite prominent. He began piano lessons at 6 years of age and played trumpet in school bands starting in fifth grade. By high school his desire was to play bass. It was 1 year later when the band they’d formed lost the guitar player that Don started guitar. “I’d watched those guys play and remembered some of the shapes. So, I sat down at the piano and figured out the notes in the chords and then looked at how I could play those notes withiin the reach of my left hand on the fret board of the guitar.” That’s how Vappie explained it to the great Dr, John during a recording session for DIsney’s remake of their classic movie, Jungle Book.

After 2 years of college as a music major studying bass, Don left to become a full time musician.

After 2 years of college as a music major studying bass, Don left to become a full time musician. By the end of the 1970s he had lost interest in participating in a democratically formed top 40 band and quit playing music for three months only to start back by waking up every morning and playing along with the Kenny Burrell record. It was during this break that he was introduced to the banjo, a sound that reminded him of the muted Guitar lines of the Soull/Funk styles. This was the beginning of a period of working with some of the most well-known jazz musicians in New Orleans including trumpeter Teddy Riley, drummer Bob French, bassist Lloyd Lambert, trumpeter Wallace Davenport, banjo/guitarist Danny Barker, saxophonist Clarence Ford, drummer/bassist Placide Adams and his brothers guitarist Justin Adams and bassist Gerald Adams. There are more names to mention but the important point is that these New Orleans musicians, who lives exemplified the Creole cultural traditions, became the important mentors for Vappie.

Vappie's first public performances as a banjoist found him tuning the banjo as the top four strings of the guitar, sometimes called ‘Chicago tuning”. Quickly becoming one of the more desired banjoist in New Orleans, he was approached by a representative of Preservation Hall to sub for banjoist Father Al who was part of the Tuesday/Friday band at that venue. It was at the conclusion of that first night that drummer, Freddy Coleman, shouted out, "hey Vappie, are you gonna be here Friday?" Don answered he didn't know and Coleman responded in a loud voice, "I sure hope so”, a sign of approval so that management would get the message. That began a decades long stent as a regular member of that band. However, Vappie was never satisfied constantly playing the same things the same way and his desire to evolve as a musician kept him involved in his own projects like the Creole Jazz Serenaders and being a regular guest with Wynton Marsalis and Jazz at Lincoln Center. To this day the Creole Jazz Serenaders continue to be a staple at the New Orleans Jazz and Heritage festival for over 20 years and counting.

Don Vappie has also been involved in many special projects.

As a recording artist, Vappie's first self produced album was in 1986. Produced as a vinyl long play album, it preceded the advent of the compact disc and was titled "Papa Don’s New Orleans Jazz Band". Three of the members of this group had played together since their garage band days. “In New Orleans there were neighborhood bands every few blocks from each other. They tended to stay together. It was more than just a band, it was a social connection,” says Don. So, it's not a surprise that once Vappie chose his sidemen for the Creole Jazz Serenaders, the members exhibited that sense of mutual loyalty as was the tradition. CJS went on to record 4 CDs, the last 2 released the day Hurricane Katrina hit New Orleans. Overnight things changed and Don began doing what he could to help the recovery by helping organize concerts and gigs to help musicians stay in New Orleans. The organization he helped form, “Bring It On Home”, raised money through donations from around the world and helped fund work for musicians in New Orleans well into the summer of 2006. At that point, priorities began to shift because businesses were opening so, the organization became more creative producing small shows like MOVIE NITE where musicians would play to a silent movie as was done a century before.

In the following years Vappie became more of an independent artist, touring as a guest with bands in different parts of the world. The PBS documentary he and Milly Vappie co-produced, American Creole: New Orleans reunion, brought Creole culture to the forefront. Milly's Masters degree in American History and our experience as a researcher encouraged Don to dig deeper into the various cultural influences that made up the diverse culture of New Orleans, the Creole culture.

Playing regularly at festivals in Europe enabled him to forge strong friendships with musicians he would not have met otherwise. His current band, Don Vappie and Jazz Créole, is made up of a bassist who lives in Paris and a guitarist and clarinetist who live in London. In a casual conversation during one of those trips Dave Kelbie, guitarist and producer, discussed with Don the possibility of doing a Creole themed album. There was immediate agreement and the result is “The Blue Book Of Storyville". This album allowed Vappie’s banjo to hold the lead instrument position as he had always conceived it was in the african griot tradition. The album has been praised by reviewers in the UK, Spain, France, Germany and others, as well as the US.

Don Vappie continues to compose and arrange music true to his heritage. As did his mentors who came before him, Vappie keeps the tradition alive and current so that the torch can be passed. As he says, "we are not here to preserve, we can only conserve and respect our past by living our culture and honoring the spirit of our traditions." 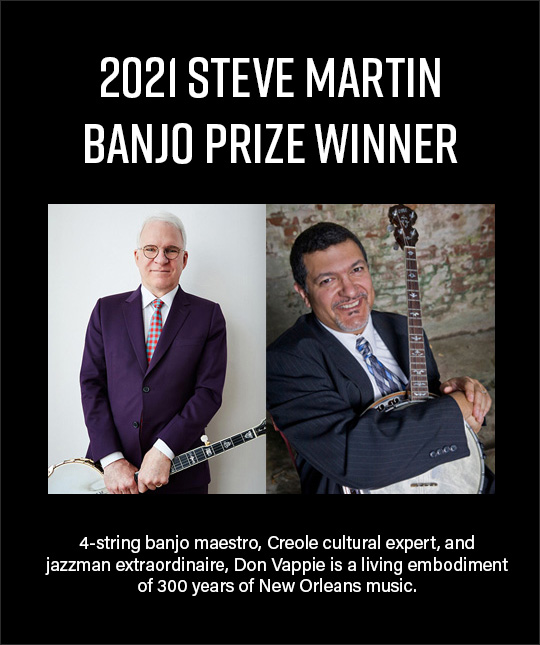